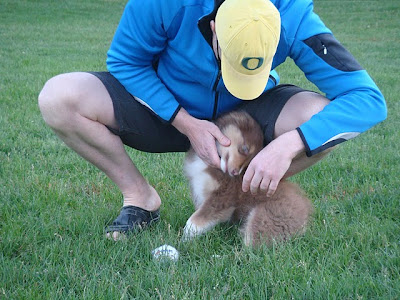 Robin and I recently added a new member to our family, Tucker, an Australian Shepard puppy. And let me tell you, he's pretty cool.

My concept of FitSpace embodies more than a physical place, rather it's a mentality that can be applied to many aspects of living. Anything that gets you up and moving, outside and into sunlight:) as a solution to a problem that normally would keep you in is a good example of the FitSpace mentality. In this way, Tucker embodies FitSpace completely.

I've never been a person who enjoys walks. I recognize this as a tremendous personality flaw, believe me. I wish that the thought of walking made me leap out of bed in the morning. The truth is, I'd rather sleep. Tucker, however, changes that. He's an excuse, a reason to walk and it's been great. When I'd normally cram in lunch at my desk or sitting in front of the noon news, I find myself now packing a small lunch and getting out. We'll go to the park and hang. Or sometimes we'll find a trail to run. All simple stuff but really fantastic.

Since we've had Tucker, we've meet more people in a month than in the two years we've lived in Salem. Tucker is like a key that unlocks the friendliness hidden in the crunchy, hard shell that is the typical New Englander. A short month after our first walks to local neighborhood parks we now hear 'Tucker!' like cat calls at nearly every street corner. And we've met dozens of doggie denizens from the area, like a secret society that non-dog owners would be unaware existed...as I was a short month ago.

I've realized that Robin is a far better people person than I. Robin has embraced the whole dog culture far faster and with less effort. When we hear 'Tucker!' she'll reply in kind, "Sam" or "Lucy." I'm generally left in the dust, 'and you are?' I think of myself as a compassionate person, caring and thoughtful. But that doesn't always mean I've got skills (or patience). Don't worry though, Tucker is teaching me.

I had dogs when I was a kid so I therefore have a little experience with dogs. The dogs of my childhood were just that, dogs. They weren't little people or precious. They lived outside in their own house and had free reign of our large back yard (most of the time). They were not well trained or very well behaved for that matter. But they were always part of our family; playful companions. The thing is, as I remember the best part of my time with 'Star' or 'Bear,' I remember being active, throwing the ball or frisbee, playing tag, hiking, and so on. Dogs just seem to embody action.

Tucker has big paws for a puppy. You know what they say, 'big paws, big (you know what).' Folks always want to know how big he's going to get. "About 55 pounds, or just big enough to pull me on my skis." It's true, I've got big expectations for this little guy. But for now we're taking it one day at a time OR in Tucker terms, one scoop of food after the other.

So, you wanna FitSpace? Consider adding a dog to where you dwell and watch the world you thought you knew transform into something other.
Posted by R.Ingram at 10:29 AM